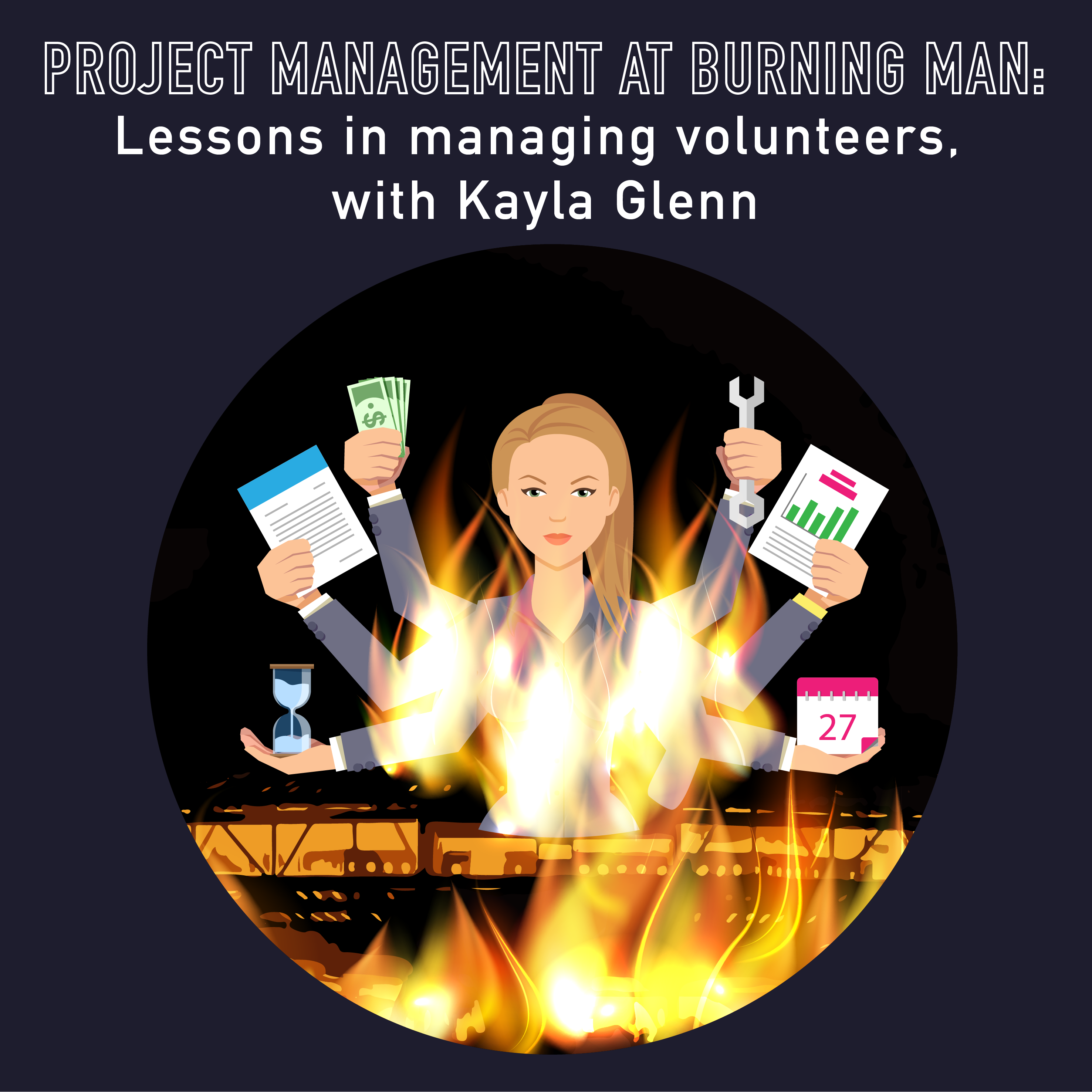 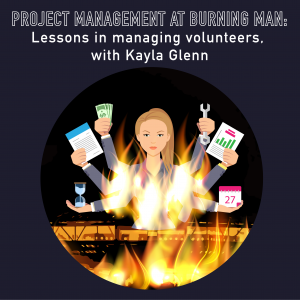 Burning Man is a famous event held in a temporary city the middle of the Nevada desert, dedicated to self expression and artistic freedom with 80,000 people. Can you imagine managing a project there?!

One of our very own PM Happy Hour members does so every year! This episode we are joined by Kayla Glenn, a project management consultant and a project manager for a camp at Burning Man. Kayla will share her lessons learned from managing a team of volunteers – lessons which translate very well to any project. Our favorite: “Everyone has a Tuesday.” Check it out!

About our guest, Kayla Glenn

Kayla is a project management consultant and CAPM. Her favorite hobbies also involve running projects, and she has run a theme camp at Burning Man for the last six years, as well as volunteering as an event coordinator in the non-profit sector, organizing fundraisers and events. She lives in Seattle, WA with a totally awesome cat, and can be found walking around Greenlake.

Get access to all podcasts, PDU certificates, bonus content, exclusive member Q&A webinars and more from our membership! https://pmhappyhour.com/membership

We love to hear about your tough PM issues, so please hit us up at podcast@pmhappyhour.com or on Facebook at facebook.com/pmhapyhour and we’ll see if we can help you. If we use your question, we’ll send you a PM Happy Hour coaster you can enjoy at your next happy hour.

Check out this episode!

PM Happy Hour member guest Kayla Glenn is a CAPM certified Project Management consultant. Her favorite hobbies also involve running projects, and she’s run a theme camp at Burning Man for the past 6 years, and also volunteers as an event coordinator in the nonprofit sector. She has worked in a lot of diverse environments, from fundraising to IT to Burning Man.

Her experiences at Burning Man lead her to pursue a role as a Camp Lead there, which ultimately lead her to her career in Project Management. When she’s not project managing, she loves to make gourmet Jello shots and rollerblade.

What is the most valuable business lesson you had to learn the hard way? [4:55]

Write Everything Down! It’s easy to think you’ll remember things, but you inevitably won’t. Kayla talks about carrying around a notebook and taking note of everything that happens. If you spend a lot of energy just trying to remember things, you aren’t spending that brain power doing something more useful and important.

Also, she discusses expecting the unexpected- at Burning Man, the isolation of the desert means you really have to take into account risk. This is something crucial to project management. You need to test everything in advance and make sure it works.

Burning Man is an event in the desert of Nevada. It’s composed of a temporary city with giant art pieces, hippie stuff, dance parties, popular DJs, and a ton of creative and weird stuff. It’s a place to meet incredible and wonderful people and question your assumptions.

Kayla discusses the challenges of working in this harsh environment where “half your resources are drunk, possibly including you, a quarter of you have gotten heat stroke, and the last few have gotten lost on their way back from the porta potties.”

Being a theme camp lead is a lot like being a producer at a venue in terms of its relationship to the Burning Man organization. Being a radically autonomous realm, there aren’t too many rules, but some of the ones they do have include staying in your designated spot, that you have elements of interactivity, many considering gas and fire, and those considering their strict “leave no trace” policy.

Tips for Project Managing at Burning Man: Don’t be afraid to delegate [15:00]

Don’t be afraid to delegate-this is especially important when your employees are actually volunteers. Kayla discusses how she put too much pressure on herself her first few years at Burning Man, and suffered a case of “scope creep.” She also felt as though if she didn’t do more work than everyone else, she wouldn’t be respected, which isn’t true. This cycle of unrealistic goal setting can lead to underdelegating.

A good rule is that if someone can do a task 80% as well as you, you should delegate that task (even if that 20% is really hard to give up).

Kayla eventually realized that if she was busy doing all these tasks, she couldn’t effectively lead her team, and that delegation of tasks actually created a level of increased trust with her team.

It’s also important to take this perspective when listening to ideas from your team- they aren’t asking you specifically to take on more work, but are asking for items to be added to the project as a whole.

This is Kayla’s best tip for delegating- tell stories, don’t give instructions. If you can build a similar vision, rather than simply assigning them a task based on your isolated ideas,

Rather than telling people where every pillow and piece of décor should go, Kayla now tells her decorating team to decorate the area like it’s the most surprisingly inviting living room in the world. This not only means that it’s not just her doing the work, but she’s getting excellent results and her team is invested in the work.

These are volunteers, so you need them to feel like they’re getting “the good job” and have a reason/motivation to do what they’re doing. Even in paid teams, they still need to feel like they have a say in what’s happening, and if they have a part in this shared vision, they’re more likely to give you useful ideas and willing to do grunt work.

Tips for Project Managing at Burning Man: Having a Tuesday [26:49]

Everybody has a Tuesday: so be kind to yourself and others. Let’s say you have an absolutely awesome day of bacon, dance parties, and sunsets, but the next day you wake up, and it’s hot, it’s dusty, you’re hung over, and you get into a screaming match with your SO being you wanted a blue electrolyte drink and they made red- you are having a Tuesday.

How do you get through a Tuesday?

The first step if being self-aware- ask yourself if you are acting out of character, if you are irritable at people you really like or feeling sad of anxious over nothing.

The next step is to take self-care tips. You can use the acronym HALT to ask yourself:  Am I Hungry? Angry? Lonely? Tired?, and fix those if you can’t, and simply acknowledge them if you can’t.

Kayla also talked about being kind to others- if your friends are being extra cranky with you, your response to be kind rather than escalating the situation can make the situation so much better.

In Kayla’s camp, the concept of a Tuesday is a form of a pause button, and sets the expectation of self-care. In work, it’s important that you are open to the fact that you and others need a break- there’s a perception that work is only for work, but half our lives are spent there. Being compassionate about our own needs and the needs of others to have breaks is an important thing.

Don’t be afraid to delegate. Tell stories, don’t give instructions- engage in a shared vision, and people will be far more inspired and motivated to do the work. And, because everybody has a Tuesday, be able to not only recognize this in yourself and team, but be kind in response.

-How can my team and I create a shared vision?

-What can someone else take on?

-How can we build a team culture where we recognize that bad days happen and we take care of eachother?

048 - Brand Yourself with Sonia Mundra